Lazy Friday and some travel info

Ah, a Friday off from work. I always have such grand plans for my days off, but so far I have managed to get out of bed, make coffee, drink coffee, eat Pop-Tarts, watch recorded crime drama shows, write a few Yelp reviews, read a couple of blogs, and... yeah... house cleaning is definitely still on the list.


And I wrote a blog post! The second in two days; this girl is on a roll! Unbelievable.

Any big plans for the weekend before I delve into Lauren's lovely blanks? I have delightfully little planned -- just a dinner with friends tomorrow night to exchange belated Christmas presents and celebrate a birthday.
﻿﻿
1. My favorite place I've ever traveled to is a tie between San Diego, CA, and Bermuda, but I'm leaning towards Bermuda since it wins in the beach category.

2. Italy is somewhere I'd love to go someday.

3. I pass the time on a plane (or bus or car ride or train) by usually sleeping and listening to music since if I try to read or watch something, I usually feel motion sick.

4. My three must-haves when I travel are good luggage, good music, a good book.

5. My favorite travel companion is my boyfriend. We travel incredibly well together.

6. The craziest thing that ever happened to me while traveling is being taken on a completely roge jet skiing trip in Roatan, Honduras. Oh, or there was the time it snowed in Arizona and our tour bus at the Grand Canyon was struck by lightning. And people wonder why I don't want to go back...

7. The most exotic food I've ever tried while traveling is tartare and ceviche.

8. If I could live anywhere else, I'd live in San Diego. Warm and sunny all year, great city, by the ocean, casual scene, friendly people. I fell in love. I think I would miss New England though.

Keep your fingers crossed for a big running year!

I haven't talked about running in a while because I'm injured, and I haven't run in over two months. I believe an old injury to my left foot is coming back to haunt me, as I get some intense pain when I run now -- and the pain has extended into other activities such as Yoga and skiing. I have an appointment with a podiatric surgeon on Valentine's Day (romantic, I know), so I hope I will get some answers then. And that those answers don't involve surgery.
Obviously my training has been on hold, and I have been terrible about getting myself to the gym for non-impact activities to maintain my fitness. I miss running, and nothing else has motivated me in the same way. Regardless, I have made running plans for 2012 -- not going so far as to register for any races yet (I don't have that kind of money to just throw away should this be something serious) but mapping out the races I would like to run.

My BHAG (big, hairy, audacious goal) for this year is to run a half marathon. Run. Not walk. Not just finish. Run. Without stopping.

Due to this pesky injury, I have scheduled a backup half later in the year in case I can't start training in March.

April: B.A.A. 5K
I just found about this new race medley from the Boston Athletic Association (the organization behind the Boston Marathon) yesterday, and I am extremely frustrated that medley registration closes January 31st (read: before my doctor appointment). I'm hoping there will still be space in the individual races for me to register for each one (and pay more, grrrrr).

The medley begins with a 5K on April 15th, the day before the Boston Marathon. This will be a good gauge of where I am in terms of running early on in the year. But I'd love to run it in 32:00 or less. 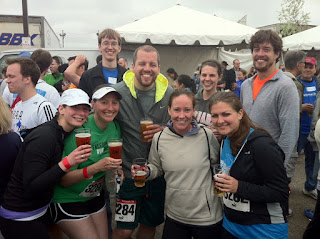 This is my team for the Harpoon Brewery Annual 5-Miler last year. As you can tell from our beaming beer faces, we had a great time. This was my first race, and I don't think anything will compare to how I felt crossing that finish line, but I really hope I can run this race again on May 20th.
My goal for this race is to simply beat my time from last year, which was 53:26. Shouldn't be too difficult, right?
June: B.A.A. 10K
The second race of the B.A.A. medley, the 10K, falls on June 24th. I wanted to run this race last year, but I didn't feel ready to tackle a 10K yet. If this is the only race in the medley I can do, I'll be happy. I ran my first 10K back in October (when my foot really started bothering me), and while it was tough, I loved it. This might be my sweet spot distance.
Oh, my time for that painful 10K was a pitiful 1:14:38. Yeah, pitiful. Therefore, I'd love to kill the B.A.A. one within 1:05:00.
July﻿: Harvard Pilgrim 10K ﻿﻿Another race I wanted to run last year but didn't feel ready for. I ran my town's 4th of July 4-miler instead, and it was brutal. Not too mention I wasn't really thrilled about the race in general. So, this year, I want to be like this guy and run through a giant, inflatable Patriots helmet in Gillette Stadium. What's more patriotic than running through a Patriot helmet? 'Nough said.
Goal: Beat B.A.A. time.
August: Providence Rock & Roll Half Marathon
After what I hope to be six full months of training, I will run my first half marathon in August, on the 19th. I was a spectator at this race last year, cheering on four of my friends in the pouring rain. I was dying to run, but I knew I was in no way prepped for 13 miles with an UPHILL TO THE FINISH. Yes, these race organizers are a bit cruel, but I want to run in my city regardless.
Goal? Well, we already established I am running the whole thing, but I didn't say I would be running fast. 2:20:00 would make me happy.
October: B.A.A. Half Marathon? Tufts 10K?
What happened to September? Well, I didn't race in September last year, and I don't have anything planned this year either. I just didn't find anything that interested me that much after a summer of racing.
October 7th is my second shot at the half distance with the B.A.A. Half Marathon. Goals will be the same as for Providence -- unless I run Providence, in which case I'd obviously want to run B.A.A. faster, even if it's only by seconds.
I am assuming the Tufts 10K for Women that I ran last year (see pitiful time above) will fall on Columbus Day again this year, which would be right after the half. Ugh. But I really liked this race last year, and I really want to do it again. October's a bit up in the air pending foot results and Providence.
December: Norfolk Annual 5K Jingle Bell Run
A lot of my running friends ran Jingle Bell or Santa races this past December, and I felt a little left out. So, this year, I want to run a very local Jingle Bell 5K in the town I cover as a freelancer for a regional newspaper. As my last race of the year, I just want to have fun and enjoy not running in crazy hot temperatures.
Well, there you have it. I've written it down. I've shared it. I'm committing. Well, assuming my foot cooperations...
By the way, I totally stole this post idea from Aron of runner's rambles. Thank you, Aron!
Posted by Jen at 3:49 PM 3 comments:

See my shiny new 2012 Goodreads Reading Challenge widget over there to the right??? I know it doesn't look too different from the old 2011 one that was there yesterday, but I am still excited for the challenge.

Last year, I challenged myself to read 12 books -- one a month. I didn't do as well as I thought I would, but I did squeeze in 10, finishing that last one on Christmas eve. I think my problem was I was also challenging myself to cross off all 30 books on my '30 Books to Read Before I'm 30' list, many of which I wasn't particularly a fan of. Once my birthday passed, I decided I was going to focus on books that interested me and I would enjoy reading, and I started flying through pages.

Don't worry, those pesky 30 books are still on my list... and I'll get to them someday.

In 2012, I'm back to the goal of reading a book a month, if not more. I have almost 600 books on my Goodreads to-read list, and I'm anxious to start all of them -- though at at once; I'm not someone who can read multiple books at the same time. So I'm committed this year. If I hate a book, I will not force myself to finish it. It will go to the discard pile so I can start something fresh and hopefully lovelier.

I'll be back to record some of my other goals/challenges/resolutions/ambitions for 2012. In the meantime, what was your favorite book of 2011? Is it something I must have on my list?