I've been meaning to catch you all up on my culinary adventures in the kitchen, but I am way behind. And, on top of that, I've been making some scrumptuous new recipes, but I forgot to take pictures! So sorry fellow chefs.
Before I get into the pictures and recipes, however, I'd like to share a little story with you of a not-so-successful incident...
I am not known for my proficiency in the kitchen -- quite the opposite actually -- but I have been trying to teach myself, trying new recipes and my Mom's classics every week. My best friend is in shock wondering where this domestic goddess appeared from.
One night, I was making a new pasta dish that had a lot of components but was pretty basic. Towards the end of all the pasta elements cook time, I threw some garlic toast in the oven with one of the components. {Side note: I may be able to cook, but I'm still trying to get the hang of that elusive timing.} The timer goes off, and the ingredients cooking in the oven are done, but my garlic bread is not.
I decided to speed things along by leaving the toast in the oven on broil. I started mixing all the components with the pasta, and I got so distracted by plating my new dish, I forgot all about the broiling bread. I only remembered when I smelled the dreaded scent of smoke, only to glance in the oven and see two rather significant flames on the oven rack where my two pieces of garlic toast were!
Jed was in the living room watching TV when he was disrupted by me screaming, "There's a fire in the oven!" He came running into the kitchen telling me, "That's not what I want to hear!" I was in a complete panic and was about to grab the fire extinguisher to re-enact the scene from The Santa Clause when Tim Allen extinguishes the Christmas turkey when I decided to just shut the oven off, leave the door closed and see what happened. The flames extinguished themselves in a minute, and I was left with two pitifully black pieces of Texas Toast.
Oh well, the pasta was amazing, and Jed popped two more pieces of garlic bread in the toaster oven. And, I will have that shocking image of two flames in my oven to savor forever. For the record, Jed had smelled the burning five minutes before I screamed, but he figured I had it under control. Yeah right, I'm the distracted chef!
I have had many successes though. Here are just a few of them from the past two months; you can click the name of the dish to visit the recipe. 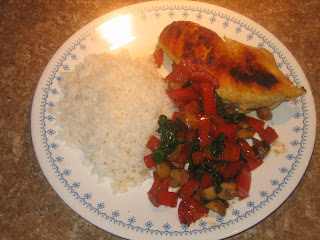 Chicken with spinach and mushrooms 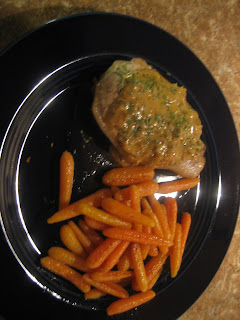 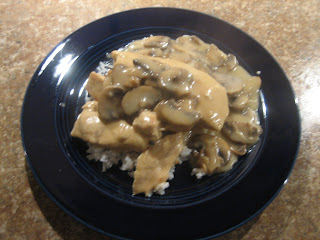 Mushroom chicken (one of my fav dishes Mom made)

Prompt #5: Where was the recipe? Tell the story of a mistake made in the kitchen.
Posted by Jen at 2:26 AM

Email ThisBlogThis!Share to TwitterShare to FacebookShare to Pinterest
Labels: In the Kitchen, series

I haven't written my piece yet as I am having a busy day, but I will. I just wanted to let you know that I do consider myself able in the kitchen and I have burned the garlic toast many, many times. YOur story is cute and entertaining! Thanks for sharing it.

I love the description of flames where the toast should be. So funny.

That's too funny! Glad the fire wasn't too serious. That's why I'm afraid to cook, haha!

Thanks so much for the awesome comments on my blog, I appreciate it!

oh man!! that's totally something i would have done!! but the pics look yummy!!! you should post more recipes!

I'd say a fire in your oven definitely qualifies as a disaster! Glad you had the presence of mind to just turn it off and keep the door closed.

Visiting from Mama Kat's Writer's Workshop. I used this prompt too.