The Life of Five Women in a Pink Honey House

I finally decided to watch this movie last night. 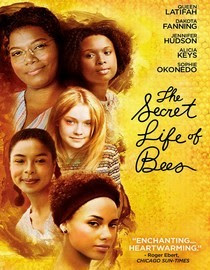 I read the book earlier this year, and, although I thought it was a slow start, I ended up really liking it and hanging at the end of every chapter waiting to find out what happens to little Lily Owens.

After watching Eat Pray Love and being disappointed (which I knew I would be), I was hesitant to even watch The Secret Life of Bees because I didn't want to be disappointed.

I wasn't. I really enjoyed this movie, and I thought it did the book justice as best it could. Obviously there was stuff cut out, but the scenes were chosen well, and the focus was on Lily's time with the Boatwright sisters, which was really the heart of the book. During that time, though, the movie could have shown more of Lily and August's time with the bees... since that is where the title comes from. I became more emotional watching the movie than I did reading the book, and that is the mark of a good movie to me -- it makes me feel something.

The casting, according to my own imagination built off the book's descriptions, was off. Dakota Fanning was great as Lily, but Rosaleen and August were not how I pictured them. I think Queen Latifah should have been cast as Rosaleen, who I pictured as older than Jennifer Hudson and a little more plump. August, in my mind, was thin, about 50 pounds lighter than Queen Latifah. May and June were close to what I imagined, as were Zach and Neil. T Ray could have been older, scruffier and more intimidating. He looks way too clean cut in the movie, although he does try to look awful. LOL

I gave this movie four out of five stars.

agreed-- i went knowing i wouldn't love the film Eat Pray Love as much as the movie....

i have to admit i haven't read the book of "the secret life of bees" but i LOVED the movie. Dakota Fanning is just amazing isn't she? and Alicia Keyes is BEAUTIFUL.

i loved your reviews and hope to read more of them :)