The Marriage of Furt

Did you see last night's episode of Glee??? While it didn't stand up to last week's Gwyneth episode, for me, it was pretty fun.
SPOILER ALERT!
The wedding music for Burt and Carol's wedding was awesome! I almost want to save it for my own wedding. I loved their ceremony -- cue the tears -- the entrance, their first dance and Finn's tribute to Kurt. It's hard to pick a favorite.
Speaking of Kurt, what a great job he did with the wedding design! I couldn't find many pictures online, but here's a picture of Lea Michelle in her bridesmaid dress. 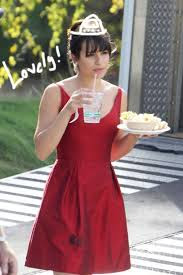 The colors were perfect for a fall wedding! You can't see it, but she had an orange Gerbera in her hair, and the flower bouquets were in similar tones. I don't normally go for reds, but this shade was really pretty and flattering. The Glee girls all wore the same color but in different dress styles -- a trend I'm loving for weddings.
Love was floating all around in this episode, but I can't say it was overly cheesy... well, except maybe for the wedding of Sue and Sue.
And, with the exception of Kurt's issues with bullying at school. Props to the Glee dudes for sticking up for him, along with Burt. But it just wasn't enough, and the episode ended with Kurt announcing his transfer to a private prep school with a strict no harassment policy.
While Kurt is leaving the school, it doesn't seem like he'll completely leave the show, as his new school is competing in regionals.
What did you think of "Furt?"
{Image via perezhilton.com}
Posted by Jen at 12:21 PM

I missed it :( But heard some of the clips from the song and it sounded awesome! I love Glee.

I haven't seen this eppy yet, but it looks good! I loved the Gwenyth eppy, it was great! Thanks for your blog love as always, xo!

I love Glee and agree that the dresses were lovely. Loved the color and the different styles.