Oh, I know so many of my fellow Blogger friends who are going to just love this article (the images are just for you, ladies!).

| FROM BU TODAY | BY DAN MORRELL

Karen Fabbri is always in heels. As the owner of Moxie Shoes, a boutique with locations in Beacon Hill and Wellesley, it comes with the territory. And sometimes her fashion statement prompts a warning.

“Women of a certain age will come up to me and say, ‘Oh honey, I love you in those heels, but you come talk to me when you’re 60,’” says Fabbri. “You hear it from the women who have paid their dues and are now they’re paying the price.” 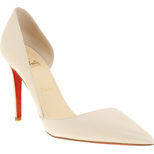 A recent study led by a Boston University researcher offers scientific evidence in support of cautionary tales from stiletto veterans, finding a strong tie between footwear and foot pain as wearers get older. Based on evidence gathered from 3,378 people, with a mean age of 66, lead author Alyssa Dufour (GRS’06,’11), a biostatistics doctoral student in the School of Public Health, finds that women who consistently wear shoes with support ranked “good” or “average” are 67 percent less likely to report foot pain later in life than those who spend most of their time in shoes with “poor” support.

The study defines “good” and “average” as sneakers and shoes with rubber soles; “poor” includes sandals, slippers, and high heels. While more than 13 percent of women surveyed reported wearing “poor” shoes, less than 2 percent of men did — none said they wore high heels regularly. The small number of men reporting wearing “poor” shoes made it hard for researchers to identify a link between their footwear and foot pain.

Results of the study, conducted in partnership with the Hebrew SeniorLife Institute for Aging Research, appeared in an October issue of the journal Arthritis Care & Research.

The pain reported by women with a history of shoes with poor support was centered in the area between the heel and the back of the ankle, which takes the brunt of each step’s shock and goes unprotected in “poor” shoes. The study also suggests that pain in the back of women’s feet may be caused by pumps that impede the heel cord from stretching fully, resulting in soreness. 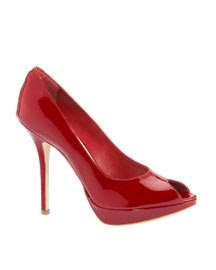 According to Kathleen McDermott, a fashion historian and an instructor at Massachusetts College of Art and Design, this unfortunate connection between fashion and pain traces to the 1950s, when designer Christian Dior unveiled his “New Look,” pointy shoes with a steep, thin heel. Before this, McDermott says, women’s shoes were blunt in the toe, sensible, and not intended to be sexy. “Dior wanted women to be like flowers, dainty and feminine,” she says. “It was the exact opposite of the utilitarian design that came before it. And a stiletto heel was a big part of that change.”

Heels remain in vogue today, their height continuing to rise. “We are in a weird heel blip right now,” says McDermott. “Every fashion spread these days has these giant heels.” 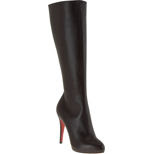 “When I started my business eight years ago, I wouldn’t go beyond two inches for a heel,” says Fabbri. Today, she stocks heels as high as five inches. “It’s always the same argument: ‘Oh, how am I going to walk in them?’ But then the customers fall in love with them. We have a lot of shoes that, if women want to wear them, they will have to take a taxi wherever they are going.”

Dufour is realistic. “Women aren’t going to stop wearing heels,” she says. Even Dufour — at 26, a prime target for the study’s findings — admits she still wears them. “I haven’t given up anything,” she says. “But it does make me think before I put on some horribly uncomfortable heels.” 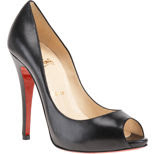 The popularity of such physically damaging apparel suggests that hidden social forces are at work, says Shari Thurer, a Boston-based psychologist and a former associate professor of rehabilitation counseling at Sargent College. “It’s a signifier,” Thurer says. “When women are wearing high heels, it forces their body into a more suggestive posture,” arching the back and elongating the legs.

“It’s ironic,” she says. “They make you taller, but you can’t move in them. They are utterly bad for you.” But in the battle between comfort and fashion, it’s another win for style

“What can I say?” Thurer concludes. “Sex wins.” 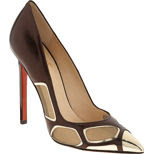 Christian Louboutin Tashaf, barneys.com
What do you think ladies? Is it worth the price?? (P.S. These fabulous Tashaf pumps are on sale at Barney's for 40% off! They also come in blue with silver accents. Heart!)
I too am guilty, although not usually with high heels; my FUggs and flip-flops are just as bad.
Posted by Jen at 1:17 PM