Whoa, I thought last weekend was a good summer weekend; this weekend was a GREAT summer weekend! All of my favorite summer elements combined into this one weekend, and it couldn't have been any better unless I escaped to the Cape for the entire weekend or something.
As I mentioned Friday, Jed and I ended into Boston to say goodbye to one of my friends from college who is moving back home. We checked into our hotel downtown, then headed out to my college stomping grounds and my favorite college bar, T's Pub (well, now it's 973 Commonwealth, lame). I was thrilled to see Absolut Boston behind the bar, so Boston ginger (as a bartender called it) became my drink of the evening.
We headed back to the hotel pretty early, but stopped in the piano bar off the lobby before heading to our room. That stop over turned into two hours of old school piano tunes, sung by a mix of a 1940's era female singer and open mic. I told Jed I felt like I was dreaming, or on a cruise ship. The bar looked like something out of the 40's, and there was even a group of people dressed in era-appropriate outfits!
While drinking Boston in Boston, a friend texted to let me know that she had an extra ticket for me to see 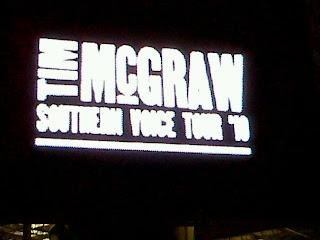 Saturday night at Great Woods (ok, it's supposed to be the Comcast Center these days)!!! I jumped on the chance to see this country legend -- performing and making country music for 22 years, according to Tim himself -- live! On top of that, Lady Antebellum opened for him, and I just love me some Lady A. 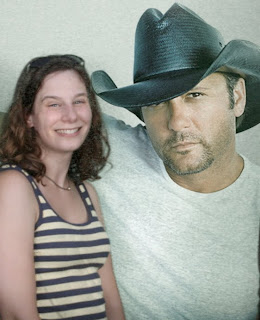 Totally cheesing with Tim
It was probably one of the best shows I've been to; I love live music anyway, but it's even better when the musicians are full-blown entertainers. Lady A sang all my favs, and Tim sang a couple of my favs and turned me into a true fan. I'm going to work on downloading his extensive library of songs. He announced he just celebrated his 43rd birthday, and lemme tell you, he is not showing his age. This country boy can still rock! I was so impressed with his show and him in general.
I've realized that I've really become a country music fan, and I think I should try to go to more country shows. There's such great music, great artists and great crowds. Lady Antebellum is returning to Boston in October, and I think I, along with these girls, are going to try to get tickets. 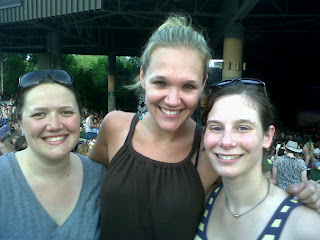 Yesterday, I slept in since it took us almost two hours to get out of the parking lot after seeing Mr. McGraw, then I was in my bikini and ready to hit the beach! I decided last week that I'm going to make an effort to go to the beach more this summer. It's really my favorite part of summer, and it is so relaxing for me. Plus, it gives me a prime opportunity to read, which I need to do a lot of to get through my 30-before-30 list (check out my GoodReads in the right sidebar to see what's on the list!). Now that I live a little closer to the beaches, I'd love if I could spend at least a couple hours on the sand every weekend.
Jed had to get some work done, so I flew solo, which was actually really nice. I packed a few drinks and snacks, my beach chair and my book, and I just chilled. The huge waves crashed on the sand while I read and lounged. It was perfect.
If only every weekend could include Boston, the beach and live music! This would be the best summer ever!
Spill: What did you do this weekend? Was it a perfect summer weekend?
Posted by Jen at 9:25 AM

My weekend was the following:

1) friday night was party night. My neighbour had his stag party, a great time was had by me.

i thought tim was real at first and i was like, damn - he is LARGE!

To answer your question about knowing it's THE Dress...for me I knew b/c I didn't want to take it off, I kept swaying in it (like I was dancing) without realizing it, it had all the components I wanted in a dress and last but not least the price was right!