{Sorry for the lack of pictures. This happened before digital photography was available to the masses!}
I was never popular in high school. I had a group of friends that gradually grew over four years so that we were 20+ by graduation, but I wasn't "in" with the cheerleaders or the intellectuals (who ironically all grew up in the town I live in now). I was with the "outsiders." We were the moshpit of rejects, basically. If you didn't fit into a clique, you belonged in "our group." I liked it that way, and I'm still friends with many of those people today.

Along with that, I wasn't very involved. I didn't play any sports, and I never had time for after-school activities with my rigorous schedule of dance classes. Then junior year came along.

I decided I was a writer, and I excelled in my English classes. I started hanging out a lot with my childhood best friend -- a boy who attended an all-boys' parochial school on the other side of the state. He was on the newspaper staff at his school, and he hung out with all of the other newspaper kids. So I hung out with the newspaper kids, and it was the clique I had been looking for.

This wasn't your ordinary high school newspaper. These guys worked HARD. They would get to school at 6 a.m. to work on the paper before classes, and they'd stay after school until 11 p.m. to finish. They published monthly (that was a big deal in high school). They had an office. They had positions. And equipment. I read their paper, and I was hooked. I longed to be that dedicated -- to make that kind of contribution.

My school didn't have a newspaper, so deciding I wanted to be the next Lois Lane, I set out to start one. I had no idea how much work it would be. I drew up a plan and talked to my English teacher who recommended another teacher in the department who was interested in a newspaper as well. She was gung ho about the idea and committed to being our faculty moderator.

I met with the principal to sell him on the idea. It was a tough sell; the school funded the yearbook and there wasn't room for another publication. Plus, try selling free press and freedom of speech at a Catholic high school. He gave me a chance though and allowed us to start the paper with no school help whatsoever.

An alumnus happened to be the editor of the local newspaper, and after meeting with him and pleading my case, he decided to print our paper for $100. We were in business!

All summer before my senior year, I did research and took notes on how to put together a high school newspaper and make it successful.

Senior year started, bringing the next challenge: recruiting a staff. I had a friend, KT, who was just as crazy and ambitious as I was who joined as my co-editor-in-chief. Jed, who wasn't dating me at the time but was obviously in love with me, offered to do all of the graphic and lay-out work since he was a computer geek. Our moderator asked her students if they were interested in becoming reporters and photographers. I hung fliers for our first meeting. I roped more friends into writing articles and taking photographs. We met in the moderator's classroom and had no more than a filing cabinet in the back of the room for storage and the library computers for writing articles.

I spent hours after school with KT, Jed and our graphic designer to come up with a name, header and logo. We decided on Green Ink as the name of the paper, and my graphic friend came up with an awesome logo: a shamrock (our school symbol/mascot) with an old-fashioned quill pen through it. It took three months to get our first issue out. Getting reporters to meet deadlines was nearly impossible. I asked the editor of the local paper how he did it, and he tactfully reminded me that he had a paycheck to dangle over his reporters' heads. I couldn't pay these kids. Where was their drive and dedication???

It was one of the proudest moments of my life picking up those papers in my mom's mini-van at the newspaper printing facility downtown and bringing it back to our "office" for distribution the next day. 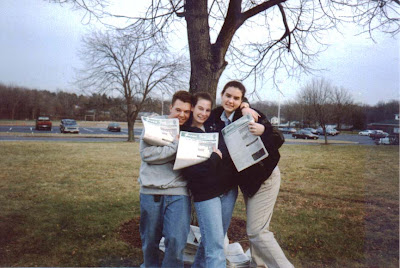 Jed (yes, that's my boyfriend 10 years ago!), me (yes, that was me 10 years ago in relaxed-fit Express jeans & an oversized Express sweatshirt!) & KT showing off our accomplishment

We only got one more issue out my senior year, but I had left my footprint in the halls of my beloved high school. I had resurrected a student organization that had collapsed 30 years earlier.

The newspaper collapsed again a year later, but I heard a few years ago that it is up and running again. I couldn't be prouder, even though it has a different name, different format and different staff. I still like to think it's my legacy.

I had my chance to shine again last year when my department at work decided to start a newsletter. Everyone knows I freelance and had studied journalism, so they recruited me as a consultant, and then as the editor. I felt the rush of choosing a lay-out and designing a header and brainstorming a name. I chose staff carefully and assigned stories. We publish every month, and I write the editorial and edit the laid-out publication every month. I love it. It allows me to relive those glory days Bruce Springsteen sang about. 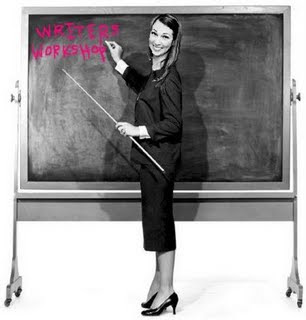 This post was inspired by Mama Kat’s Writer’s Workshop: Prompt 1.) Describe something you're proud of.
Posted by Jen at 9:45 AM

Email ThisBlogThis!Share to TwitterShare to FacebookShare to Pinterest
Labels: series

How amazing! I could totally relate to you... I, too, went to Catholic school. I, too, was an outsider ( we must all become writers or something) and I was also on the paper... but it wasn't enough for me. Together with my partner in Catholic crime, we started a 'zine. Remember those, in the 90s? It was called Boundless Reject... and it was all ours.

Today, I am a writer, a blogger, and in real-life- a newsletter editor and marketing extraordinaire. Isn't it cool when we get to do something we love- and get paid for it?

That was no small task getting that newspaper published, you should be proud. How nice that you still have this outlet at work now.